March – the most wonderful time of the year!

Appalachian Trail Thru-Hiker Season is upon us.

For those who not acquainted, AT Thru-Hikers are completely insane people who decide to spend anywhere from 4-8 months walking 2,100 miles from Georgia to Maine (or Maine to Georgia) on the Appalachian Trail.  I used to think that they were  totally insane and wasting their lives.  Because backpacking is stupid.  But then I caught the bug.

I’d backpacked a bit years as a Boy Scout back in 1997 or so.  My pack weighed something like 50 or 60 pounds (I weighted 130 at graduation).  It rained… a lot.  I fell in the first mile and cut a nice four in gash into my arm.  The first night, my tent washed out.  Now everything I had was wet and weighed even more.  I had crummy knees at that age (too much butterfly goalie in street.hockey), and they acted up.  Rocks were everywhere and it wasn’t so much walking as hopping.  The Appalachian Trail is stupid.

Then in 2009, one of my Scouts said words I had never wanted to hear, “We should backpack.”  I told him backpacking was stupid.  He insisted that we should do it.  I told him that if he convinced more Scouts to go backpacking, that I would be one of his adults.    There is no way that he could ever convince a bunch of kids that didn’t want to wake up in the morning that backpacking was a good idea. I figured that was the end of that.

Then he  found a bunch of younger Scouts, plus a few of his buddies, into doing a 50 mile trip over Christmas.  It was cancelled due to lack of adults.  He tried again the next Christmas.  Cancelled due to 10 inches of snow.  Some things just aren’t meant to be. 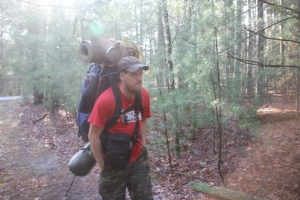 Then, instead of relaxing over Spring Break, I found myself hefting a 45 pound, poorly put together back and trudging through the pine barrens of New Jersey on the Batona Trail.  The trail is (was, God bless the men who reblazed it recently) poorly blazed.  We walked the wrong way for almost two miles the first day.  Of our four older Scouts, one got horrible blisters 7 miles in and had to get picked up, one twisted his ankle and had to get picked up, and one got heat exhaustion.  IN APRIL!  A bunch of 12 year olds realized that they’d be hoodwinked and got picked up that night.  And the only other adult on the trip broke his foot at the end of the day.  At the end of the day 1 (14 miles), we’d gone from 13 Scouts to 5 (four of them only 12 years old), from 4 adults to 2, one with a broken foot.  My feet didn’t feel good, I had horrible chaffing in areas that aren’t discussed in polite company, and my sides and shoulders were being chaffed like crazy.  Three days later, the last seven standing staggered out of the woods, 51 miles from where we started.  Even the guy with the broken foot (I’m completely serious).    I walked funny for a week, and my shoulders and hips were rubbed raw.  That should be the end of backpacking, because backpacking is stupid.

Two and half months later, we backpacked up to Sunfish Pond on the AT.  13 more miles. 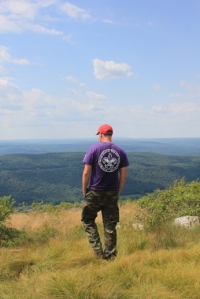 I carried a backpack up here… 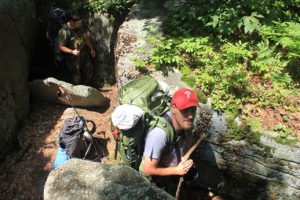 Why am I here?

…it was 53 miles of the Laurel Highlands Trail in the Allegheny Mountains.  At least I shed stuff, my pack was down to 39 pounds.  But it was HOT.  With long climbs.   I hated backpacking.  It’s stupid.  How’d I end up doing 117 miles of it in a year? 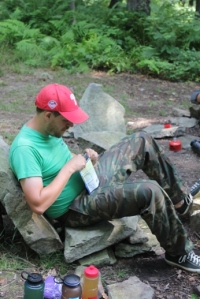 Cooking food in a bag is stupid. 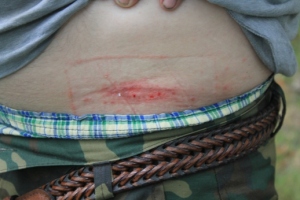 Awful chaffing is what the magazines never show you.  Spend the money on the fancy wicking underwear.  For serious. 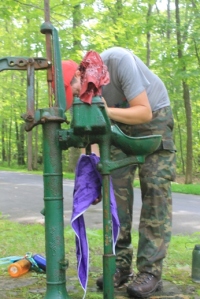 They also don’t show you leaves and mud coming out of a pump.

First, it was just one – Southbound.  Written by a pair of sisters who thru-hiked the whole trail… barefoot.  Obviously crazy people.  Then I read their other book – Walking Home..  Because what better way to recover from a thru hike than to turn around and go back?  At some point, I stopped borrowing and started buying –  Jeff Alt’s wonderful “A Walk for Sunshine” where he raises money for the home his disabled brother lives in and Bill Bryson’s “A Walk in the Woods”.  I read the classics – “Walking With Spring” by Earl Schaffer (first man to ever thru-hike) and Appalachian Hiker – Adventure of a Lifetime by Ed Garvey (first published thru hiker memoir… wife got it for a quarter at a yard sale).  I even went out to see Paul Molyneaux  and his son talk about their thru-hike (his son Asher was 9 when they finished.  Yes, 9.)

This might be a bad sign. Also, they are totally awesome people and super nice. I highly suggest following their facebook page – the Barbarian Utopia.  Buy their book!  Buy their book!

And then one day, you find yourself at 10,000 + feet elevation, starting a six day adventure that you aren’t entirely sure you’ll last one day on.

And it’s a long way down.

But day by day, you do it, even if you think you can’t.

Spotting moose grazing over your campsite. 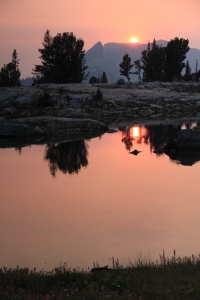 Watching amazing sunsets over alpine lakes that you couldn’t get to any other way.

Especially when said old friends refrain from breaking their foot this time (true story.  Then he walked another 40 miles on it). 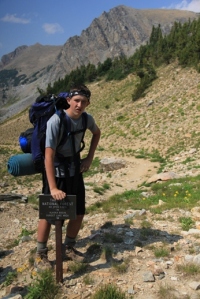 Or folks with everything ahead of them.

These are the times, places, and people that you’ll think about until you’re old and gray.  And somewhere along the line, what you hated has become what you love.  I assure you, it isn’t any less stupid than it used to be (it’s really, really stupid).  And it doesn’t hurt any less than it used to.  But you’ve caught the bug.

It’s views out the window of your tent (Sunfish Pond).

It long climbs up hills to beautiful views on the AT. 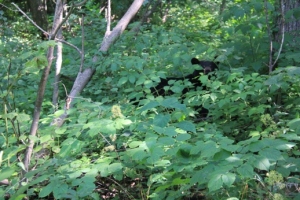 It’s the experiences that don’t happen to normal people. Like the time we almost walked into a bear. You don’t see the four people behind me, glad that I’m at the front. Because I didn’t zoom in here, I was too busy getting ready to run for it.

And before you know it, that pain in the neck kid who forced you to backpack is backpacking with you… only he’s not a kid anymore… and you invited him along.  Sure, you’ll blame him as you walk clear across Maryland, but it’s your own fault by this point. 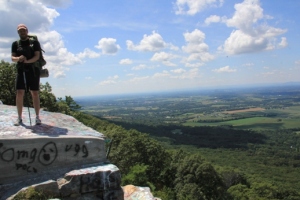 Because I can’t see this at home. 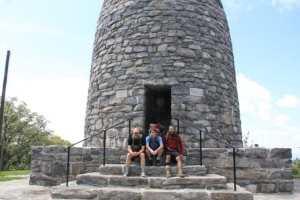 And middle aged women who take your picture will tell their disbelieving children that people will put a pack on a go for a walk for days or weeks at a time… for fun! 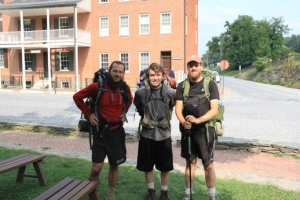 And by the end of your little 45 mile walk, you’re already thinking about your next one.

So why do I love thru-hiker season?  Each new year, thousands of folks set out to walk the AT because they’ve  caught the bug.  As the kid and I are stuck inside the apartment on another ridiculously freezing day, or I’m at work dealing with another crazy day, there’s a place deep inside that is super excited, because once again, folks are setting off from Springer Mountain.  Once again, day by day, mile by mile, they are having an adventure of a lifetime while inching ever closer to the end at Mt. Katahdin.  I might never get to go, but out there this very moment, other people are, and that’s amazing.

This year, I’m following a few of them, and you can too.  None of them have paid me off, but if they want to retroactively, I won’t argue with them (WITH UPDATES):

Beau – “Water Tower Graffiti – my favorite of the thru-hikers, lots of stories and pictures.  UPDATE: Had to leave the trail in Pennsylvania when he hurt his knee pretty badly.

Kristin and Eric – “Trail Mix and Dirty Underwear” –  – a couple on on the trail.  UPDATE: Left the trail at the halfway mark to pursue other interests.

Sarah – “Appalachian Trail 2014” – very excited to be hiking.  UPDATE: Got off to a really rough start, but stuck with it all the way through Georgia before heading home.

Dr. Dave Rough – Hike It Forward – Last one of the group to leave.  He’s hiking because it’s awesome, but also to help raise money for scholarships for needy students to attend Christian Schools in Ohio.  UPDATE: He made it all the way to the top of Katahdin!

All have interesting blogs so far, so I’d imagine they are going to stay pretty interesting.  Best of luck to all of them!

11 responses to “March – the most wonderful time of the year!”