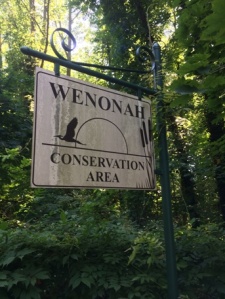 * NOTE – The Wenonah Conservation Area has a lot of trails and miles, I’ve decided to split it up but what’s east and west of the railroad tracks that split the town (which is how their map also splits it up). To see the trails West of the track, please go here

Distance – About 2.5 miles total trail miles east of the tracks, more when you need to backtrack on a road or on trails to finish a loop, but always worth the walking
Type: Interlocking loops and a one-way trail.  Figure 8 with the roadwalk.
Difficulty: 4 of 10 – some ups and downs and a few trails on hillsides with tricky footing.
Total score: 7 of 10.

Directions – I parked at the Eldridge Loop Trailhead, on Pine Street just past the intersection with Princeton Ave in Wenonah, NJ

Standouts – Lots of bridges over creeks, deep woods, some interesting walks up and down hills

Markings –No blazes, but use wooden signs at intersections.  Follow the wooden signs and the worn path (was a little confusing on the Indian Trail, but otherwise pretty clear).

It was a beautiful, warm 80 degree Friday, and I had off from work, so The Pres and I headed down to Wenonah to check out a series of trails that the town has built over the years.  I’d be given a heads up on these ones from James (who has a nice blog about pizza in Glassboro for those in need of the low down on Glassboro pizza) when I started this blog up back whenever I started this blog.

Because The Pres has short legs and I have a sizable gut, we decided to break down this series of trails into sections, focusing on the trails East of the train tracks that cut through town

We started at the Eldridge Trail at Pine Street.  Make a right from the road onto the trail!

Start of the trail. 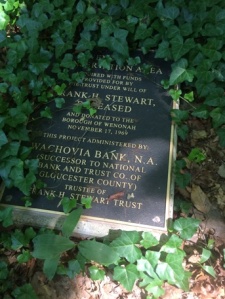 Recognition for one of the fine people who made this system happen.

Follow the trail down a series of spread out steps until you reach a bridge.  No handrails, so cross carefully.  You’ll notice that the trail splits to the right almost immediately after this.  Stay to the left on the Eldridge Trail.  You’ll cross another bridge, then some planks over marshy bits.  Finally, you’ll end up at an intersection.  The Eldridge Trail goes straight, the Indian Trail goes right. 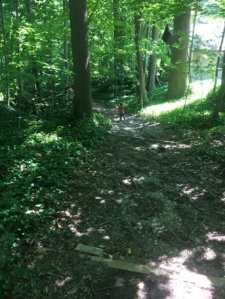 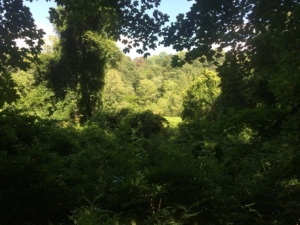 Some nice little views through the trees. 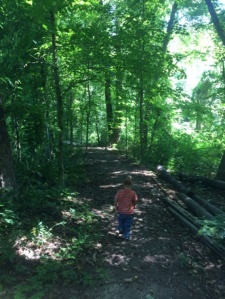 Nice little view from the bridge.

The second, much smaller bridge.

Intersection with the Indian Trail.

Not having a map (the office closed at 1 PM on Friday, we got there at 2… whoops), we decided to take the Indian Trail, which is listed as 0.25 miles.  In retrospect, don’t, it is just a connection with Indian Trail Road.  If you follow it, you just end up in a cul-de-sac and have to come back the way that you came. 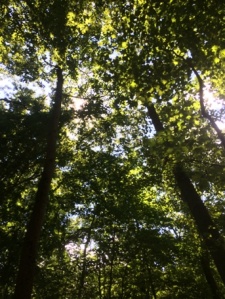 Emerging onto the paved road.

So after our 1/2 mile detour, we ended up back at the Eldridge Trail where we’d left it. 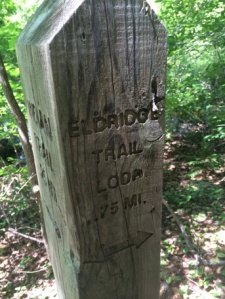 Back on the Eldridge Trail to complete our 3/4 mile loop through some really nice swamps and over some lovely bridges.

Monongahela Brook Loop turnoff. We didn’t turn here because someone was acting tired, but I totally suggest adding this loop to your hike.

Of course, someone immediately decided he wasn’t tired after all. Oh well. 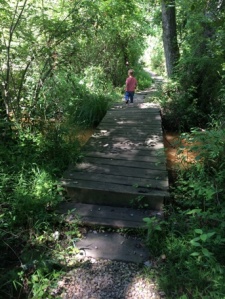 Did I mention how nice these trails were?

End of the Eldridge Loop.

The end of the Eldrige Loop Trail will bring you to Comey’s Lake.  There is a nice bench there to sit at and admire the water.  You can then go left and follow the trail past the house up the road.  OR, you can hang a left and complete the Comey’s Lake Loop (3/4 of a mile).  This loop is a little more challanging than the Eldridge Loop, with some unexpected short climbs.  I totally suggest going with option 2.

The trail follows the water until it runs out, then follows the swamp muck until you reach a split in the trail.  Left goes across a bridge to the other side of the lake.  Right goes up to a really nice pavilion that is great for a picnic.  If you go up to the pavilion, you do have to backtrack to the split at some point (can’t live there, no matter how nice it is!)

We made it to the lake!

Mr. Stewert, you are awesome. 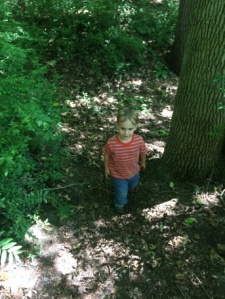 We headed right to go around the lake.

At the split int he trail. 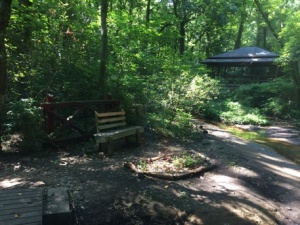 View of the pavilion from the bridge.

From here, it’s a short climb up to the ridge.  The trail will follow the ridge for a while, stopping to decend and then re-climb a few times.  The most interesting is the enclosed steps.  Don’t follow them to the bottom, that’s not the trail.  Exit at the gap.  This route will eventually bring you to an entrance/exit in the fence at the road, next to the nice house.

Stairs! You can see the gap to get out.

We, of course, did not notice it until the bottom.

Some nice drop off here. 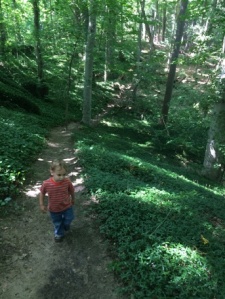 This is a really nice trail. I think I said that already.

We, of course, didn’t get off at the exit, and instead headed back down the path to the lake, headed out on the dock, then realized that the trail back to the car was up at the top where the gap in the fence was.  Whoops.

Still, not a bad turn to miss if we got this. 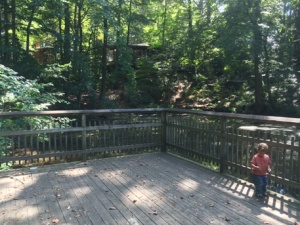 Someone climbed up to take a look. Don’t let his mom know.

So we backtracked and walked down the road back to the car and trailhead.  This is the “official” trail, there is no other connection.

Head down the road. 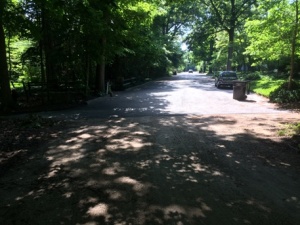 Having found the car, The Pres decided he was upset because he wasn’t done hiking, even after two miles.  So we headed back down the Eldridge Trail to where the Monogahela Brook Trail (not to be confused with the Monogahela Brook Loop, while shares some of it’s treadway, just not here) had come in and hang a right. 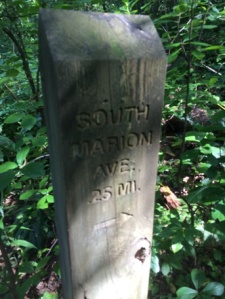 It’s a 1/4 mile to South Marion Road and the highway bridge.  This 1/2 mile has some tricky footing (see also: Difficulty 4 rating), so be careful!  It’s an interesting little jog in the trail. 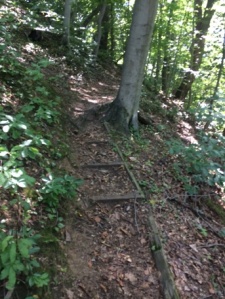 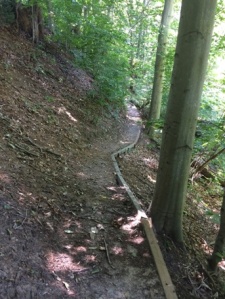 The Pres and I each slipped about here.

Made it to the stream!

Here, we turned up the road and completed our loop with a road walk.  That was dumb, don’t do that.

Instead, cross over South Marion Road and keep going about another 1/4 mile to where the Monogahela Brook Trail ends.  There, there should be another intersection.  One way will be the beginning of the Mantua Creek Trail (which we’ll talk about some other time, as it quickly crosses the tracks and into our next adventure here), the other way will be the very short Garden Trail, which will bring you up to Clinton Street and the playground.  You can then walk straight down Pine Street for 0.2 miles to your waiting car.  This is the same distance as what we did, only a safer roadwalk and a nice bit of forest to boot.

The last trail East of the tracks is disconnected with any other trails, and offers a two block cutthrough next to the school, alongside the railroad traicks.  It stretches about a 1/4 mile.  Not much exciting about it other than it offers a shortcut between the middle of town and the upper part of town without solely walking on roads.  The best part is that you parallel the train tracks, and I always love seeing how train tracks work their way through a town. 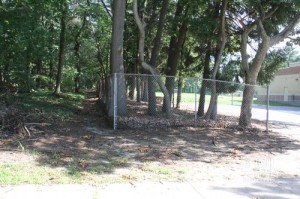 South entrance. The street dead ends, but the trail keeps going where the right of way would be.

The first part runs along a fence. 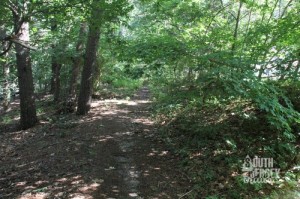 Then gets a little more woodsy. The second half of the trail is slightly more overgrown than the first half. This is the only part of this expansive trail system in Wenonah that I’ve ever thought was the slightest bit overgrown.

You’re never far from the tracks.

Once you exit the woods onto Maple Street, turn left, cross the tracks and you’ll be at Wenonah Lake and Wenonah Woods Trails West of the Tracks. 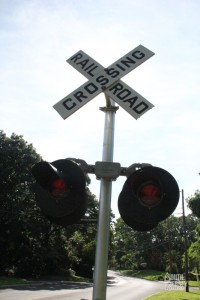 Overall recommendation: I LOVE these trails.  Interesting, well maintained, with some tricky parts to make it really interesting.  Walking the whole system over five trips only made me love this even more!  Not bad for a town that isn’t even a square mile, not bad at all.

Nearby – The Wenonah Woods Trails West of the Tracks are amazing

Wenonah is also a great town to take a stroll through. 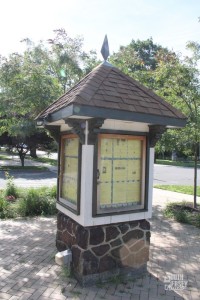