Dog friendly? – Yes, must be on leashes.
Stroller friendly? – Extremely friendly, paved pathways that used to be for golf carts
Benches? – No
Restrooms/changing tables – No facilities on the premises

Standouts – It’s brand new, so the exploring factor is awesome.  Also, lots of wildlife!  Saw a turtle and some great birds, and Roger went back in to find a snake that often hangs out in the same spot. Second trip there, saw a hawk and a gold finch and nearly stepped on a snake.

Markings – Have started marking the trails.  One (the Green Trail) is marked so far.

Description – So I got really excited back in November when Friends of Maple Ridge announced that a deal had been successfully brokered where the former Maple Ridge Golf Course (perhaps better known as Ron Jaworski’s Eagles Nest) in Sewell had been acquired by the State of New Jersey for Gloucester County’s very first state park.  HOORAY!

In February 2016, the land got it’s name – Tall Pines State Preserve.  A few weeks later, The Pres, Tree Rider, and I showed up to hike there!  Only the place was covered with “No Trespassing” signs.  We got a little worried (especially as we were the only ones there), so we left and did another hike.  We later found out we had been in the right spot, and the No Trespassing signs didn’t count anymore.  Grrr…

So we headed back at the end of April.  This time, we were doing it in style.  The boys and I were joined by loyal reader Roger (who takes awesome wildlife photos, and who had also hiked here a few times already), Jeff of Get Outside, New Jersey! fame (seriously, getoutsidenj.com), and my buddy Mike (who I’d been in Scouts with) who brought out his seven month old son for the hike.  We were a motley crew, ready for exploration of this abandoned golf course.

There were no maps of this place yet (Update: Friends of Tall Pines has put out a map now, which is included above).  No facilities in place.  No trail markers (update: one trail has now been blazed).  They finally did get most of the No Trespassing signs down, but there are still a few left to make you worry you’ve accidentally wandered onto someone property (update: these are gone now, yay!)

Anyway, we started walking west out of the lot that lies along Bark Bridge Road, following the outer trail.  It quickly curves around and heads due South.

This is now the trailhead for the Green Trail.

I was immediately struck by how little this looks like a golf course.  I mean, if you know that it was a golf course, you can tell, but nature has quickly reclaimed this place over the last 8 or 10 years since it closed down.

The other side of it being a former golf course is all the non-native decorative plants that are still surviving here.  It makes it quite an interesting walk plant-wise!

Someone is walking very slow today.  He got put in the pack right after this. 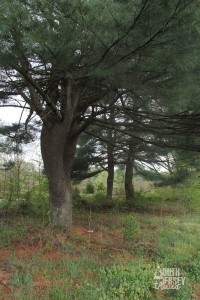 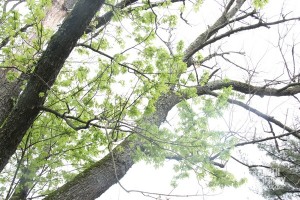 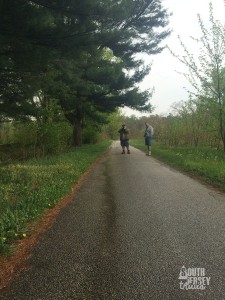 The Pres takes a picture of Jeff… 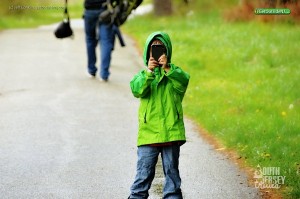 Taking a picture of The Pres.  Photo courtesy of Jeff at getoutsidenj.com

The Pres is definitely getting better at taking pictures.  Also, we all look weird from the height of a four year old.

The first split in the trail is as you reach the first pond (leftover from the old golf course, of course of course).  This split is inconsequential, as either way you pick goes around the lake and meets back up right away.  We went left.  Just because.

The way around to the left curves around the lake, then heads straight down to the first major intersection.  Here, you can go left or straight.  Roger pointed out that this is the intersection of the whole trail system.  If you turn left here, you can wander around various trails and eventually end up back in the parking lot.  If you head straight, you enter a section of trails that you can only backtrack to this point to exit (unless you want to walk up the road).  You can see this from the map, where we retraced our steps. 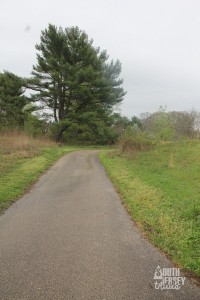 This put us between two ponds, with a small spillway over the trail between them. 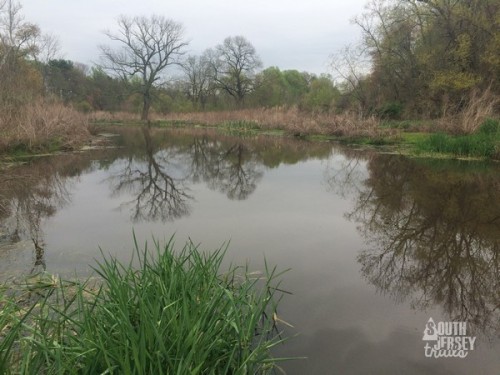 Larger pond (to your left). 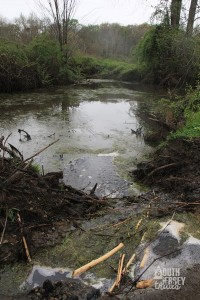 Much smaller pond to the right.

A pretty pond from another angle.

Just after is a swampy area.  Apparently, a turtle hangs out here in the mud, which Roger promised, then immediately found.  I love turtles-on-demand. 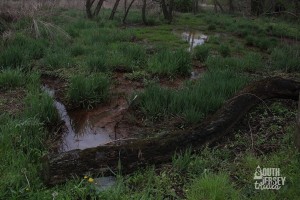 Right after this, you’ll cross a solid bridge over Mantua Creek (the positive end of bridges having to hold golf carts… they are solidly built!). 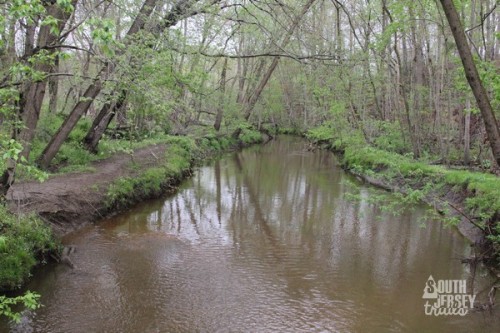 Mantua Creek from the bridge.

Jeff checks something out as The Pres takes a picture.

Creek the other way.

After the bridge, you’ll reach a T intersection.  We opted to head right. 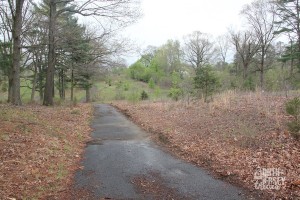 At the next intersection, you can head straight and continue around the loop, or turn right.  To the right, it looks like it heads into folks yards, so we decided to stay left.  To the right, there were pretty flowers though. 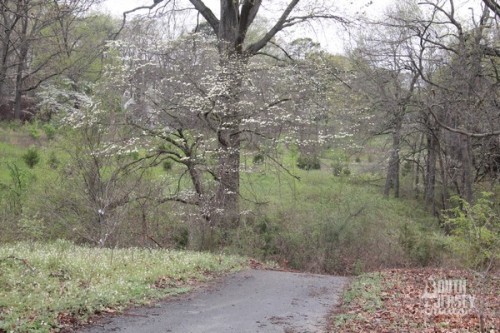 The trail now heads East toward Glassboro Road.  We kept going until it began to curve North. 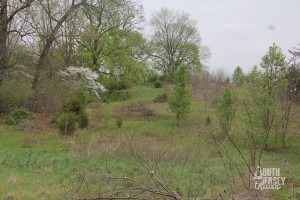 Talking shop about New Jersey outdoor blogging.  In this picture, I am realizing I have never really thought out this absurd blog in advance.  We here at South Jersey Trail apparently strongly believe in blindly stumbling along through cyberspace. 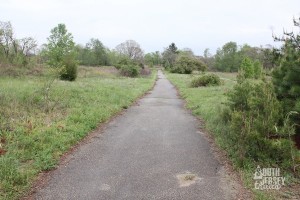 As we curved North, Roger pointed out that this would take us back to the T intersection after the bridge.  However, if we turned around and cut across to the outter loop, there was more to explore on this side.

Of course, we opted to explore more, so we cut over to the outer trail and headed East on that trail.

The trail curved around to the North and hit another intersection.  We opted to head straight here, which took us down toward the creek. 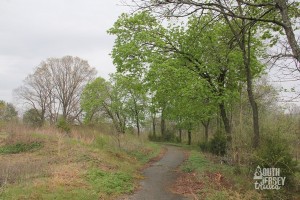 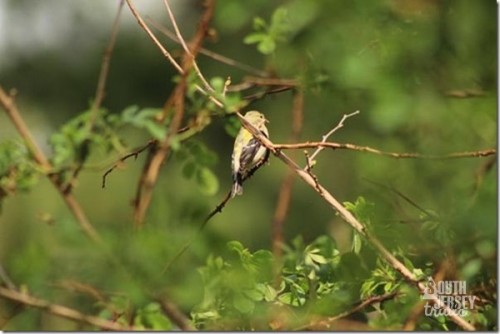 Roger took this great shot of a bird, I think somewhere near the creek.

At this point, I get a little hazy where we went.  We went down to the creek, then backtracked to the trail.  Then we cut down a hill and headed down to the creek again, this time crossing a bridge that was there.  We headed a short ways down the trail, but beaver activity has flooded this area out, so the trails that connect this area to the rest of the preserve are under water.  Fun! 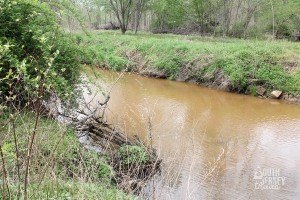 Seeing the creek at the first trip down to the water. 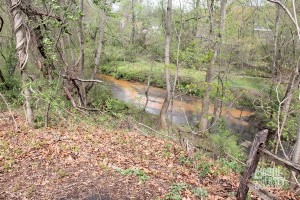 Overlook of the creek.  Shortly after this, we head downhill (off trail) to cross a small bridge over the creek.

Creek from the second bridge.

Across the creek, you can walk for a bit, but you’ll eventually be blocked by flooded trail.  You’ll have to head back the way you came.

Back at the second bridge, we cut uphill the way we came, but then passed over the trail and cut straight uphill to the second trail, where we made a right.  This quickly brought us to back to our  the T intersection that followed the main bridge.

From here, it was a right, back across the main bridge (Reminder: This bit MUST be rehiked, it’s the only bit of trail connecting the two ends of the park), hopping over where the lakes spill over into each other, and back to our MAJOR intersection.

The time, we opted to turn RIGHT at the MAJOR intersection this time, heading into the area of the park we hadn’t explored.  At this point, I stopped taking pictures for no reason what-so-ever.  Whoops.

If we had chosen the other direction, we could have wandered another two loops of trail, ending up back at the parking lot in a different spot than we’d started out.  This was the big chunk of what we missed on our hike, but luckily future me encourages you to read further down in this post.

Back in the parking lot, we got the babies settled, said our goodbyes, and headed for civilization, with a super awesome hike in the books.

Except for Roger.  He went back in to explore some more, and found a snake. 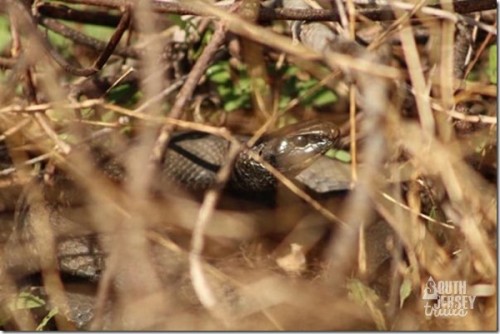 Once again, a huge thank you to Jeff of getoutsidenj.com, Roger, Mike, and Mike’s little dude for joining The Pres, Tree Rider, and I on such an excellent adventure.

Three trips back here later, I’m confident that I’ve hiked all the trails now.  After cross the initial bridge by the pond, you can make a right turn and walk a large loop near the houses and road, which will bring you all the way around back to near the creek.

Walking toward the pond when its GREEN.

I love the tree here that look they shouldn’t be here. 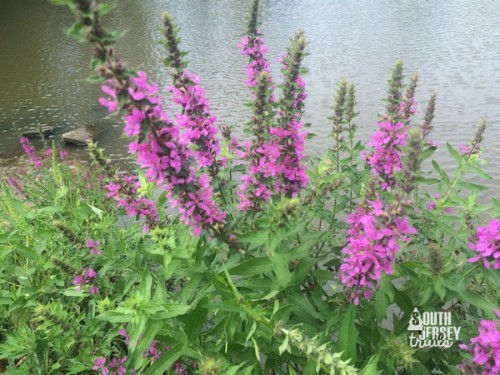 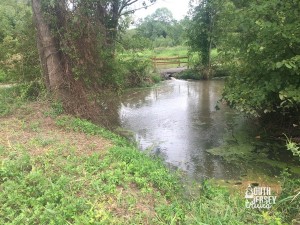 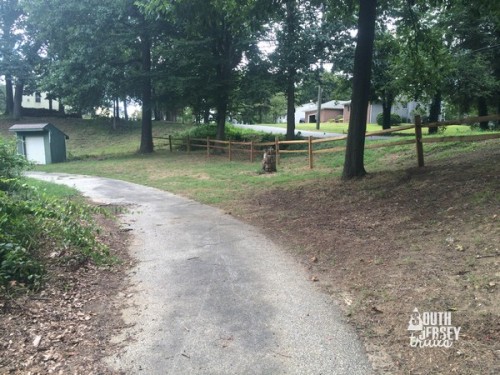 Rounding the curve near the edge of the preserve.

I seem to have taken few trail pictures on this stretch and many flower pictures. 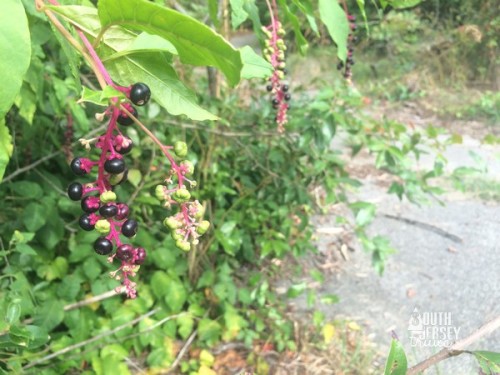 Eventually, I rejoined where I’d been before and crossed the smaller of the two bridges. 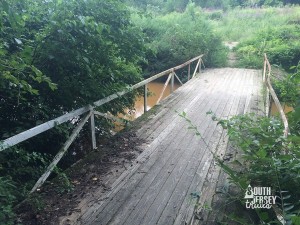 This next stretch is sometimes passable, and sometimes under water.  It was also just across the next bridge that I nearly stepped on a snake!  Sneaky, sneaky snake. 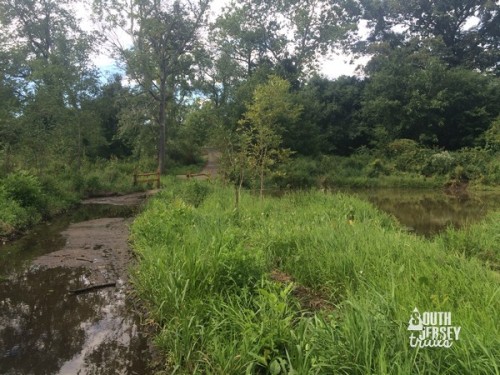 From here, I backtracked across the first bridge and by the large pond, then explored the trails on the North side of the preserve that I hadn’t seen before.  There, there are are two big loops, with a cut grass area to connect the two.  This area was less interesting than the south side to me, but has a few signs of buildings that used to be there, and some fields that should be good for birding.

Past the pond again, then right onto the trails I hadn’t done.

This side is a bit more open. 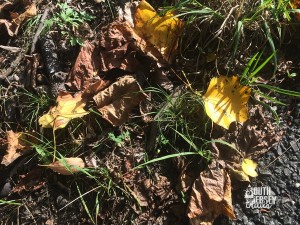 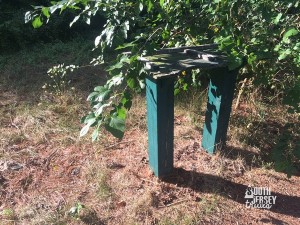 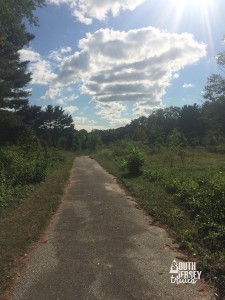 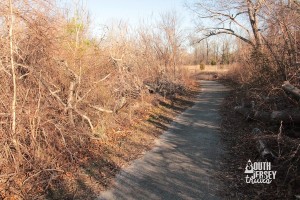 Also, great spot to pick up some trash. 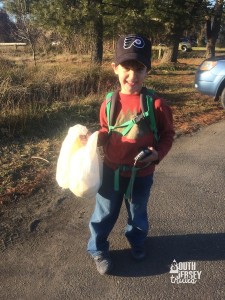 Overall recommendation – I’ve been here four times now, and I really, really love this park.  It’s so close to my house, but I’ve found something new and awesome every time.  Virtual high five to the amazing people at Friends of Maple Ridge and South Jersey Land and Water Trust who saved this land.

Nearby – This is literally right down the street from Wenonah Woods (East of Tracks).  The Indian Trail (actually a road) trailhead for the Eldridge Trail is only 1/4 mile as the crow flies from where we entered Tall Pines. The Glen Trail Trailhead for Wenonah Woods (West of the Tracks is a 3/4 of a mile drive.  I would love, love, love, love, love if they can eventually figure out a way to put a connector trail through connecting these two systems.