Save the Historic Hugg-Harrison House!

But ten minutes before it started, I found my car heading in that direction.  I ended up at the… 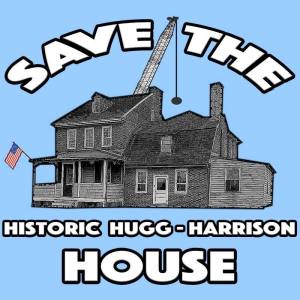 I’m not from Bellmawr.  I’ve never even been on the same property as this house.  None of my relatives fought in the Revolutionary War battle on that property (they were all still in their potato fields back in Ireland).  None of my family is buried at the Catholic Cemetery there.

But I well remember being a small kid in the backseat of my parents car.  Whenever we went to Philadelphia to visit my Great Aunt or to go to my dad’s work, we’d come home down 295.  As we came down the one stretch, I’d always crane my neck to see the house with the “1764” bricked up high on the end wall.  I got a thrill every time I saw it, trying to imagine what it was like for a house to last that long.

When the news re-struck the wire about a year and half ago that that same house I’d admired as a kid was coming down to make room for a noise reduction wall for a highway project, I was sad.  I read an article in the paper, read an interesting history of it written by South Jersey History Superhero Jerseyman, and felt even sadder.

The problems (from my understanding):

– When the project was developed over ten years ago, this house was found eligible for listing on the National Register of Historic Places by the paid group that surveyed the property, but this was changed in the final report to “not found eligible” by a New Jersey Department of Transportation bureaucrat, although its unclear whether this was an honest misunderstanding or some shenanigans.  If that information had been correct, Federal laws for the protection of historic buildings would have kicked in.

– The New Jersey Historical Commission up in Trenton signed off on the findings, seemingly without doing their own due diligence.

– When the mistake was discovered, the state said “Whoopsie!” and offered money to pay someone to take pictures of the bricks.

Why is it worth saving?

– The fancy brickwork is one of the last examples of colonial pattern brickwork in South Jersey.

– This is one of the last remaining plantation houses in Camden County from the early settlement of West Jersey.

– The owner during the War for Independence, William Harrison, was an officer in the local militia that saw action during the war, including at the Battle of Gloucestertown where some of the fighting took place on his own land within view of the house (although not part of the property now).  This battle was led on the American side by a guy named the Marquis de Lafayette.  Due in part to his victory, Lafayette got a promotion to lead a division.

Why do I care?

To be completely honest, I didn’t really understand most of this of this until last night.  What got me to that meeting was a lot simpler.  Shortly after reading the article in the paper about the house coming down, I made sure to point out this house to The Pres, and told him to take a good look, because it wouldn’t be there much longer.  He poked his three year old head up above the window and obliged his daddy by taking a look at the house.

I only mentioned this once, but every single time since,  whenever we came down that stretch of Route 295, he’d look up at the house, and ask me why they were going to knock down the house.  Then, he started asking me about it even if he hadn’t seen it in a while.  Recently, he’s started telling other people about the house, like people in Delaware who have never seen it.  Many of whom are totally confused about what he is talking about.

So I went to the meeting.

I’m sentimental, but I’m a realist… we can’t save every old building.  But the Save the Historic Hugg-Harrison House Committee has quite a plan – they want to move the house to a nearby piece of property already claimed by eminent domain and being used on the highway project, but that will not be a permanent part of the project.  Then, they want to create a Revolutionary War Museum, telling the story of Lafayette, Harrison, and all the other South Jersey heroes of the War for Independence.  They already have the right person for the job – the head of the Indian King Tavern in Haddonfield, who happened to head of the project for the new visitors center at Monmouth Battlefield (which is REALLY nice, if you’ve never been).  So with a plan comes the question…

How will it be paid for?:

This is not a cheap project.  However, the Camden County Historical Society and the Save the Hugg-Harrison House Committee have a plan to pay for it.

– If the property had been correctly accessed, the federal government would have been required to pay a share of preserving or moving the house, roughly 80%.  Roughly $400,000 right there.  This is not extra money, this is what the share would have been if New Jersey had done its job properly.

– The local government in Bellmawr has gone all in on the project, and has procured a conditional $50,000 grant for the project.

– If they managed to get an agreement to move it, The Pres and I will  be having a lot of bake sales out on the White Horse Pike, if it comes to that.

What can you do?

After 250+ years of wars, storms, and the wear and tear of time, the Hugg-Harrison House is potentially down to its last weeks of existence because of a sound barrier wall.  What can you do to help save it?

3) Write a letter, e-mail, or call the office of Congressman Donald Norcross to thank him for his support so far. Congressman Norcross wrote a letter to the Department of Transportation supporting saving the house, and has requested an emergency meeting with that organization to discuss this issue before it’s too late.

I look forward to the day when I can take The Pres inside this historic building to check out a newly opened museum.  Then, he’ll be able to tell everyone (confused and not confused) about a house.

The one that they didn’t knock down.